Buenas, Dejo los puntos clave de los mercados según Blackrock. Seguro que Sergio nos pondrá un informe más completo (y en castellano), pero lo acabo de encontrar y creo que puede interesar como avanzadilla. 1) Central bankers are in charge "Until global economic growth picks up in earnest, we think investors will again and again turn to central banks for direction and support". Blackrock expect the over-reliance on central bankers to create problems down the road and a market overreaction when the Fed does start to hike. 2) Underweight US equities Blackrock is worried about US economic softness, and especially note the lowly Chicago Fed National Activity Index and call it "one of the most telling economic indicators." They note that it has been negative for 7 out of 9 months this year. They warn that manufacturers will get hit by the strong US dollar and weak overseas demand. 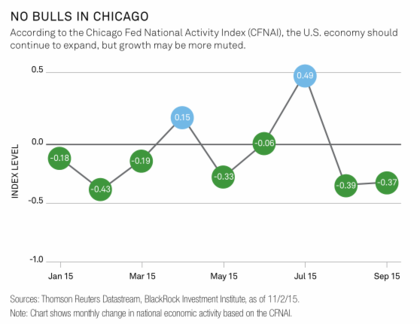 3) They see a weak euro In outlining their overweight Europe strategy, they highlight that hedges should be put on to account for the soft euro. The ECB is on the verge of extending its current quantitative easing (QE) program past the original end date of September 2016. This could pressure the euro to weaken further ---a tailwind for eurozone stocks. The only caveat, given the expectations for more QE and a soft euro, investors should consider strategies that employ a hedge against some or all of the euro exposures." 4) Overweight Japanese stocks They note that Japanese stocks have outperformed U.S. stocks by a wide margin year-to-date, relative valuations are still highly favorable. They expect near-term share buybacks and the potential for more action from the BOJ. 5) Sector outlook - underweight global consumer staples - overweight global financials - neutral in energy - neutral in emerging markets - favor high yield bonds. Saludos