CHF: With the SNB meeting this morning at 8.30, and realistically no floor change expected, London is coming in and booking profits on short CHF positions after Swiss government comments saying that ‘further economic worsening is unlikely’. Usdchf got hit pretty aggressively from 0.9315 down to 0.9280, dragging eurchf down with it from around 1.2140. Pressure now remains on usdchf as the euro rebounds, although bids are expected around 0.9250. 0.9340 is the topside level to watch, with 0.9200/20 the support zone below. Eurchf is holding for now above 1.2100, although it remains vulnerable to a sell-off if the SNB ‘disappoints’. 1.2070 should be the first support. 1.2150/75 should provide decent initial resistance, with 1.2240 the next resistance should we get another squeeze to the topside. Our orderbook remains light to the topside, with the downside structure unchanged having bids 1.2000/50 with stops below the floor.

CHF: people were buying EURCHF recently in part as a cheap bet on the upside in case the SNB moves the peg. Well, this didnt happened and EURCHF could revisit its old range. A test of the peg seems less likely at the current point especially given the CHF selling ag USD

EURCHF was already off the intraday high coming into the meeting, so that may have been taking out the tail expectation for something to occur at the meeting. The bigger question is why you would want to sell at 1.2085. The move from EURCHF to trade very close to the peg was partly a function of expectation that Jordan would not have the guts to stick to the policy, but this meeting only reiterates that the SNB is saying all the right things. Thus there really isn't good risk return in trying to bash EURCHF down more than the knee-jerk dip. I think the better trade if you are not bullish on the pair is to sell vol. Alas, finding a bid could be difficult.

I think here price action will be critical. Market not really sure what drove chf yesterday -- punt on snb or other factor -- if it can stay above 1.21 without snb move and with kneejerk selling, I think it bounce further up 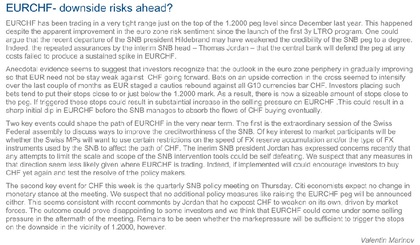